Chicago, IL — While tinnitus (ringing in the ears) has no cure, one science-based app, Diapason, can offer relief to some of the 50 million people suffering in the U.S.

Beginning on World Hearing Day, March 3, Diapason will offer $25,000 worth of free subscriptions during March.

Tinnitus is one of the most common health conditions in the U.S. It occurs when people hear sound – such as buzzing, swooshing, hissing, clicking and whistling – yet no actual external noises exist. An estimated 50 million Americans experience tinnitus, with 20 million having a chronic (constant) condition, according to the U.S. Centers for Disease Control (CDC).

Unlike the vast majority of tinnitus apps that focus on sound masking, Diapason combines diagnosis, education, sound therapy and psychology to provide a more complete, science-based offering. Diapason is considered a class-1 medical device in Europe through its licensing with the French National Agency for Medicine and Health Product Safety (ANSM). 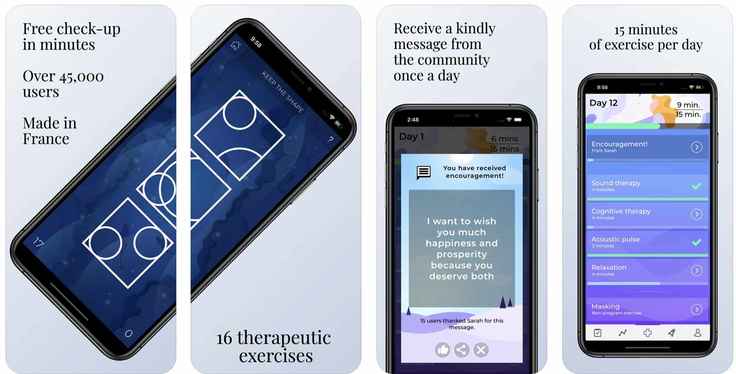 Screenshots for the Diapason iPhone app

The World Health Organization (WHO) sponsors World Hearing Day annually to raise awareness about how to "prevent deafness and hearing loss and promote ear and hearing care across the world." This year it is celebrated on Wednesday, March 3.

Most therapeutic treatments for tinnitus are offered only through hearing clinics. Diapason gives users access to many of these therapies right from their smartphones. The app's three- to five-minute activities are tailored to each user's exact tinnitus pitch and tone. Many users experience an improved quality of life in as fast as two weeks, with more substantive improvements happening after a few months. More than 45,000 people have downloaded Diapason.

"I have severe bi-lateral tinnitus from my time in the U.S. Army, and the exercises within the Diapason app have been quite helpful in managing my tinnitus," explained Todd Brackman, a longtime Diapason user and Philadelphia resident.

The Diapason app can be found on the App Store and on Google Play, where a full check-up can be done free of charge. The full-featured, therapeutic program is $129 a year.

Through each of the app's games, users are subtly exposed to that sound in new and positive contexts. This retrains their brains to let go of systematic, negative associations with their tinnitus and decreases their awareness of and focus on it. The games double as way to provide acoustic re-education as well as cognitive and behavioral therapy (CBT).

"We want everyone to have access to tinnitus treatments typically found only in labs and clinics," explained Diapason Co-founder Lilian Delaveau. "Diapason now provides anyone with a smartphone a relevant, science-based, tinnitus therapy program."

Since Diapason's U.S. launch at the Consumer Electronics Show in January 2019, Immersive Therapy has made several updates to the app, including: