I have severe, longstanding hearing loss in both ears. Since childhood, I have suffered through—and often completely avoided—parties and other challenging social situations. It wasn’t until my third year in university that I discovered an extremely helpful strategy for interpersonal communication—I learned to dance. 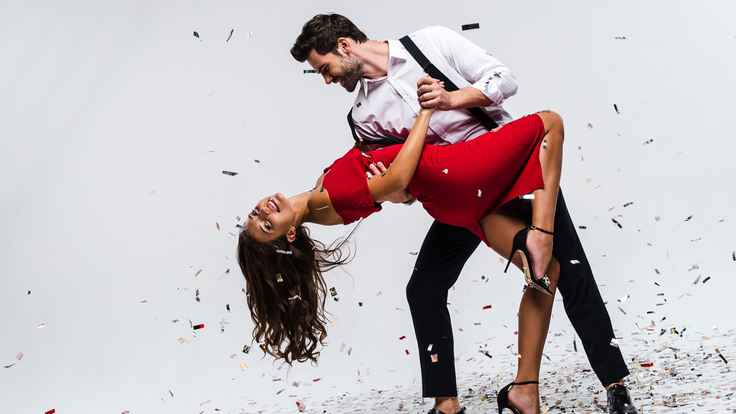 Communicating through touch on the dance floor.

Dance offered me a way to connect with other people without all the usual challenges of spoken communication. Especially with ballroom and other forms of partner dancing, the personal connection was often quite literal (see below).

Communicating through a sense of touch

Rather than having to rely on my sense of hearing, I was able to communicate with others through my sense of touch. Over the years, I have even enjoyed taking classes and performing with dance partners who are blind.

There are quite a variety of people who like to dance, and I found that going out dancing was a good way to meet people. As I gained more experience with dance, I probably also became a bit more confident. Not only did I meet many of my LinkedIn connections and Facebook friends out on the dance floor, but the first woman that I ever dated was a history teacher who I met through swing dance.

You may have "the right stuff" too

Still, you might not believe me. So let me share a well-documented story from a man who is much better known for overcoming barriers involving sound.

Chuck Yeager, in his autobiography, describes how he met his future wife while trying to arrange a USO dance. The day his squadron relocated to Oroville, California for training, Chuck and one of his pilot buddies visited the local gymnasium, where they found the office of the social director for the town’s USO, a very pretty brunette named Glennis.

Chuck asked if she could arrange a dance for thirty guys that very evening. Glennis looked annoyed. “You expect me to whip up a dance,” she exclaimed, “and find thirty girls on three hours’ notice?” So Chuck decided to make a move. “No,” he replied, “you’ll only need to come up with twenty-nine, because I want to take you.”

Heading off isolation and depression

Of course, I don’t claim to have ever been quite as smooth as General Yeager, but I did continue to find reasons to keep dancing besides the chance to ask out an attractive woman. I have learned that there are many benefits to social dance, especially for people with hearing loss. Specifically, while research has determined that hearing loss can lead to serious problems—such as isolation, depression, and dementia—social dance can actually address those problems.

Understanding how dancing socially can head off isolation and depression may be fairly intuitive. Social dance is an enjoyable activity that requires getting out of the house and interacting with other people. Personally, I will admit that I was struck with severe depression several years after college. I did not really start to feel a lot better nor start to make any new, close friends until I started going out swing dancing regularly.

In my experience, social dance scenes can be highly supportive communities. Barbara Ehrenreich, a cultural historian, also argued in her book, “Dancing in the Streets,” that danced rituals may have long served as a cure for isolation and depression.

How dance may ward off dementia

But what about dementia? A 2003 research paper published in the New England Journal of Medicine examined the relation between leisure activities and the risk of dementia. The basic conclusion of the researchers was that some cognitive activities like reading and doing crossword puzzles did offer some protection against dementia; however, the only physical activity to offer protection against dementia was frequent dancing.

Moreover, of all the leisure activities studied, frequent dancing offered the greatest protection against dementia, even more than reading or doing crossword puzzles. In discussing the 2003 paper, a popular dance ethnologist at Stanford University named Richard Powers further concluded that the mental acuity benefits of dancing come from rapid decision making, which is much greater in freestyle social dancing compared to the memorized steps in performance or competitive dancing.

In other words, if you have a hearing loss and are looking for reasons to take up or to continue dancing socially, not only can social dance make you happier but it may also make you smarter. Cary W. Tucker is a former paralegal who transfigured into a paraplanner. He obtained a Certificate in Personal Financial Planning from the University of California Irvine and went on to become a CERTIFIED FINANCIAL PLANNER™ or CFP® professional. He enjoys providing treatments for financial health.