Measuring the Eardrum and Middle Ear
By Brad Ingrao, AuD

Tympanometry is test that checks for problems with the eardrum and middle ear. It assists in the diagnosis of common ear-related issues like Eustachian tube dysfunction, fluid in the middle ear (with or without infection), and holes in the eardrum. The test is quick, painless, and can be performed by a variety of medical professionals and technicians. 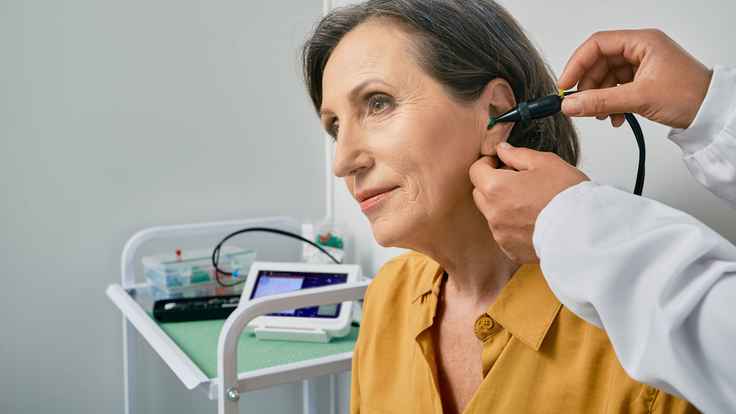 A tympanometry test typically takes about 1-2 minutes to administer. During the test you may hear a soft hum, depending on your hearing sensitivity.

Before we get into the nuts and bolts of tympanometry, let’s take a quick look at the structures and typical function of the middle ear.

The middle ear is an air-filled space between the tympanic membrane (eardrum) and the oval window of the inner ear. Attached to the inside surface of the eardrum are the three smallest bones in the body, the Malleus (Hammer), Incus (Anvil) and Stapes (Stirrup). These bones, or ossicles for you Latin buffs, are collectively known as the ossicular chain. Their job is to amplify incoming sound vibrations in order to help in the inner ear convert them to nerve impulses. 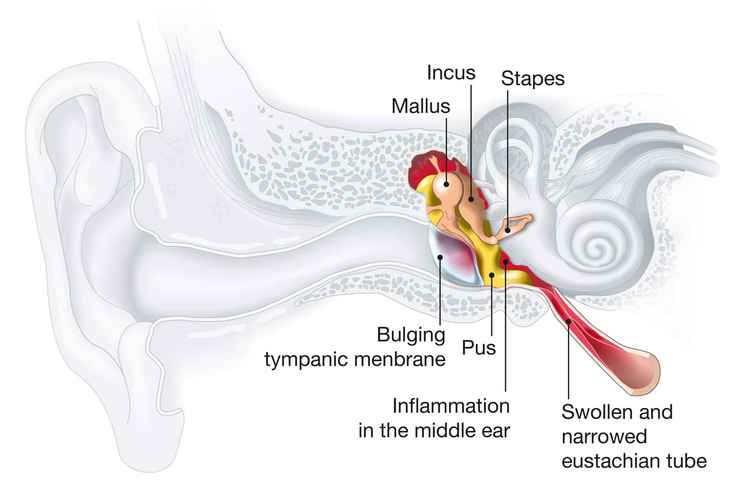 Tympanometry is a test that aids in the diagnosis of middle ear infections by measuring the movement of the eardrum.

This middle ear system generally works very well. However, it assumes that the air in the middle ear is the same pressure as the air in the room. In order for this to happen, the Eustachian tube, which connects the middle ear to the back of the nose (nasopharynx) must open and close freely every time you swallow. When this tube gets stuck or blocked, pressure builds up in the middle ear and the world sounds muffled. If you’ve ever flown in a plane or dove to the bottom of a swimming pool, you’ve felt this pressure.

This pressure is released with the next swallow which causes the salpingopharyngeus muscles to pull open the Eustachian tube and your ears “pop” to release the pressure.

What happens if the Eustachian tube gets stuck?

When you can’t pop your ears to equalize the pressure it may be due to several things: Sinus inflammation, a sore throat or possibly an infection inside the middle ear. Even a mild Eustachian tube dysfunction can cause some hearing loss. This hearing loss increases as the negative pressure worsens, and if fluid, or effusion develops, you can have enough temporary hearing loss to make average conversation sound like a whisper.

The most common way of evaluating a plugged up feeling ear is to have your PCP or audiologist look in your ear with a special tool called an otoscope. This procedure, called otoscopy, allows the examiner to see the position and color of the tympanic membrane (eardrum). If there is an active bacterial infection, the eardrum may appear red and might have a fluid line (meniscus). 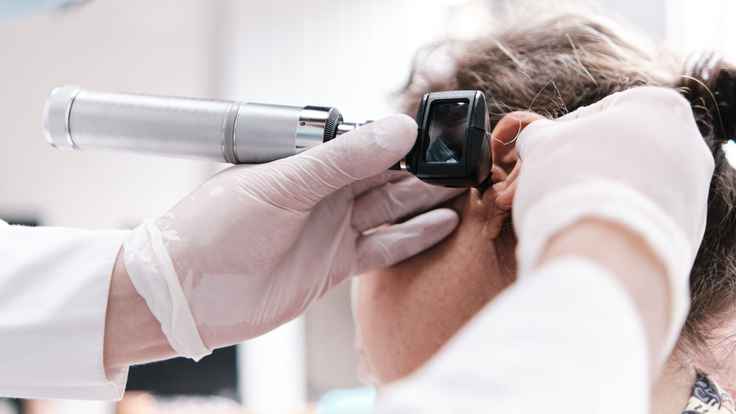 An otoscope allows your doctor to evaluate the health of your eardrum and ear canal, and look for problems beyond your eardrum.

Some practitioners will use a special attachment to puff air into the ear canal to observe eardrum movement. (Pneumatic otoscopy). This is the traditional way for medical professionals to assess the middle ear, but it misses several important functions of the middle ear, and non-infectious disorders. Let’s take a look at how modern technology allows for a more accurate assessment of what’s going on with and behind the eardrum.

Tympanometry means to “measure the tympanum” and is a test that evaluates the function of the middle ear. It is a subset of middle ear, or impedance measurements, that also includes acoustic reflex measurements. In recent years, these have been renamed middle ear muscle reflexes.

While there are many versions of the machine (called a Tympanometer or middle ear analyzer) that perform tympanometry, they all function the same way. 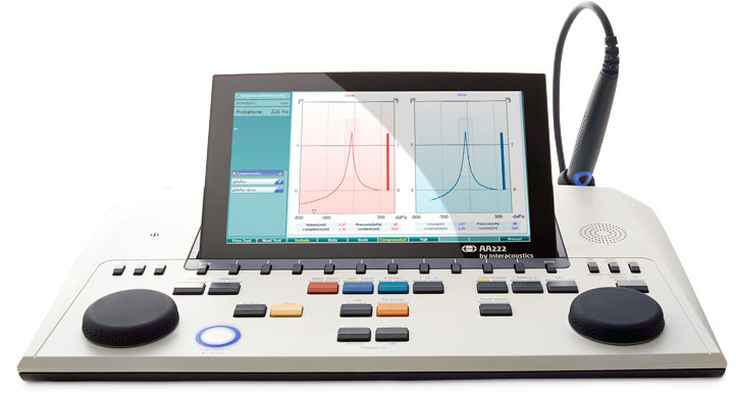 A tympanometer is a device that is used to test the movement of the eardrum and evaluate the health of the middle ear. Image courtesy Interacoustics.

After carefully inspecting the external ear canal and ensuring there is no cerumen (ear wax) occluding the canal, a soft rubber or silicone tip is placed on the tympanometer’s probe. The probe contains a microphone, a speaker and tube connected to an air pump in the tympanometer.

Next, a sound called a probe tone is played into the ear and the microphone captures it as it reflects off the eardrum. The tympanometer calculates the time it takes for that reflection and determines the volume of the ear canal. Ear canal volume measurements allow the examiner to determine objectively if the eardrum is intact or if there is even a very small perforation that might have been missed during otoscopy.

The next step is for the air pump to vacuum out air, then pump it back in, all the while measuring the changing ear canal volume. This creates alternating positive and negative pressure in the ear canal and has been described as feeling like a very short airplane ride. Using these measurements, the tympanometer creates a graph of eardrum movement called the Tympanogram.

Tympanometry is very safe for both pediatric and adult patients, and can be performed by many professionals and paraprofessionals including:

Many people describe tympanometry as “as hum followed by a very short airplane ride.” Most people say that tympanometry is not painful and only takes 10 to 15 seconds per ear.

The procedure is very safe, and for most people there are no lasting effects after the test is complete. If you are having tympanometry to diagnose a persistent Eustachian tube dysfunction, a middle ear infection or middle ear effusion (fluid) your ear may feel like it needs to “pop” for a few seconds after the test, but this generally resolves quickly.

How are the results of Tympanometry interpreted?

In the early days of tympanometry, James Jerger, PhD began analyzing tympanograms and correlating them to other hearing test results and physical examination observations to allow clinicians to quickly know of a middle ear was normal or not, and to help add additional correlative data to the entire diagnostic picture.

Key components of the Tympanogram: 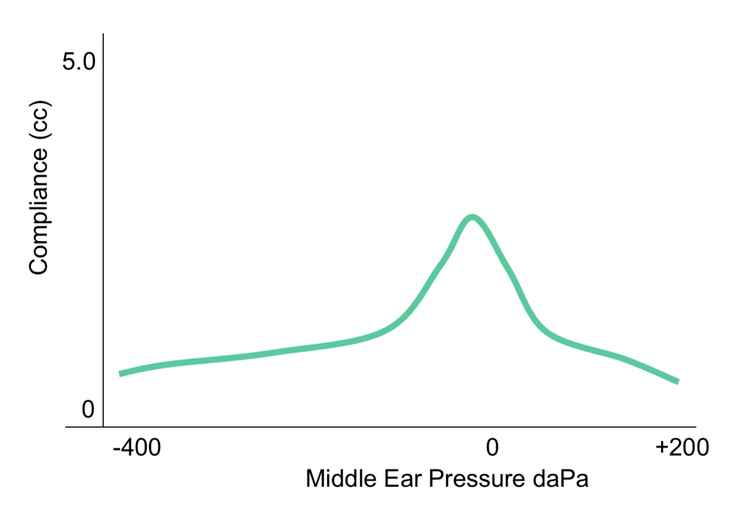 Type A tympanograms are typically seen in normally functioning ears. 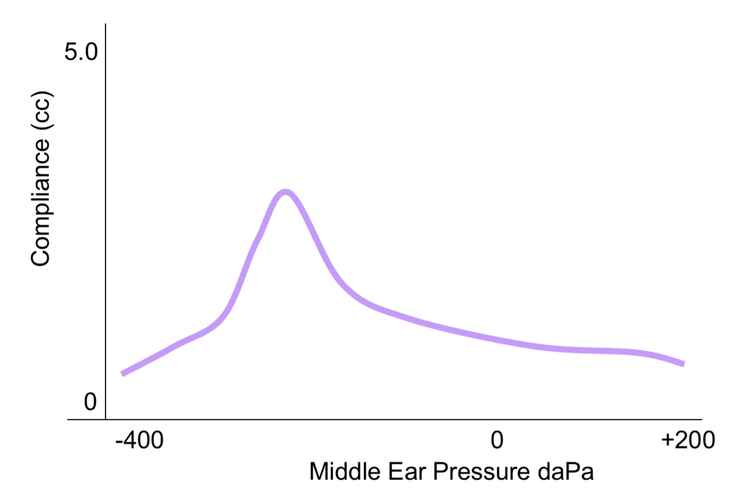 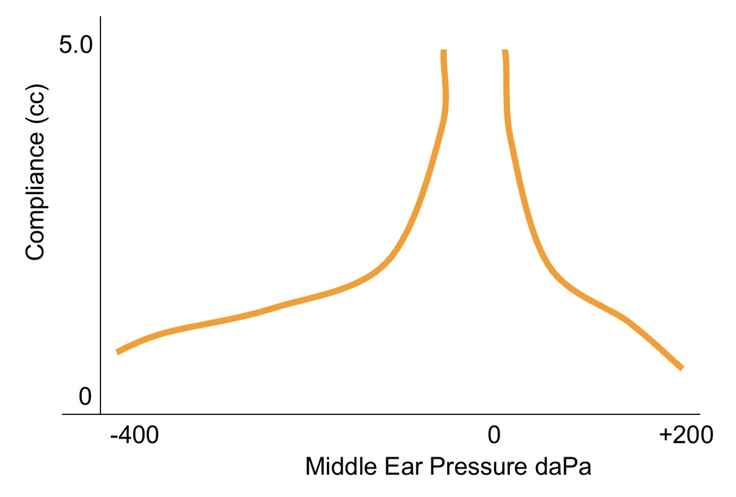 Type Ad tympanograms are typically seen when the eardrum is "hypermobile". 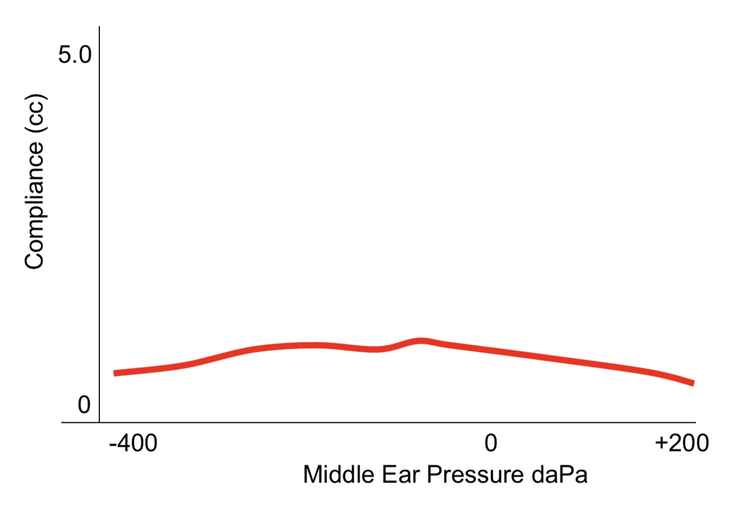 Type B tympanograms are typically seen in cases of middle ear infections.

How are the results of Tympanometry used to treat ear problems?

Tympanometry is a snapshot of the structure and function of the middle ear. It is used to not only diagnose acute problems like a perforated eardrum or middle ear fluid (effusion), but is critical in helping document when treatment is successful.

Here’s a typical example of how tympanometry is used clinically:

Your 4 year old child’s teacher reports that they don’t always answer when called on in class and recently began pulling on their right ear. You notice that the ear is red and feels hot and that they are running a low grade fever.

You take them to the pediatrician who, after performing otoscopy, suspects an ear infection (based on the fever) and what appears to be a line of fluid visible on the eardrum. The nurse performs tympanometry with a Type B (fluid in the middle ear) result in the right ear and a Type C (Eustachian tube dysfunction) in the left. They also notice that the back of the throat (pharynx) is red and inflamed. The typical diagnosis for these test results would be Otis Media with Effusion (OME) in the right and Eustachian tube dysfunction in the left

The pediatrician prescribes a course of antibiotics to treat the infection and a steroid nasal spray to reduce the swelling in the pharynx.

Another week of the nasal spray and the second follow visit shows normal Type A Tympanograms in both ears, indicating no infection, fluid or Eustachian tube dysfunction.

Tympanometry is also part of a standard audiological evaluation for both children and adults. It is also a prerequisite study for an inner ear function test called Otoacoustic Emissions (OAE) since normal middle ear function is required to measure OAEs. 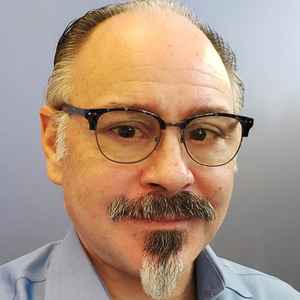 Brad Ingrao, AuD is a Doctor of Audiology who grew up around hard-of-hearing people. He has been practicing clinical audiology since 1992. Known as an early adopter and supporter of disruptive technologies and practices, he is always on the lookout for ways to improve access to quality hearing care.