Olive Union wants to eliminate the stigma associated with hearing loss by normalizing the use of wearable hearing technology. Their vision is undeniably appealing, but how do their hearing aids fare?

In this article, we'll be looking at the Olive Pro, Olive Union's newest hearing aid.

Something new from Olive Union

Released on August 23rd, this is Olive Union's second hearing/earphone device, the first being the Olive Smart Ear which was released in early 2020. I wasn't too impressed with the company's previous effort (the Olive Smart Ear), so I hoped the Olive Pro would be a step forward.

The Olive Pro is a two-in-one device that combines a hearing aid with a set of true wireless earbuds that look identical to any other pair of advanced Bluetooth earphones. 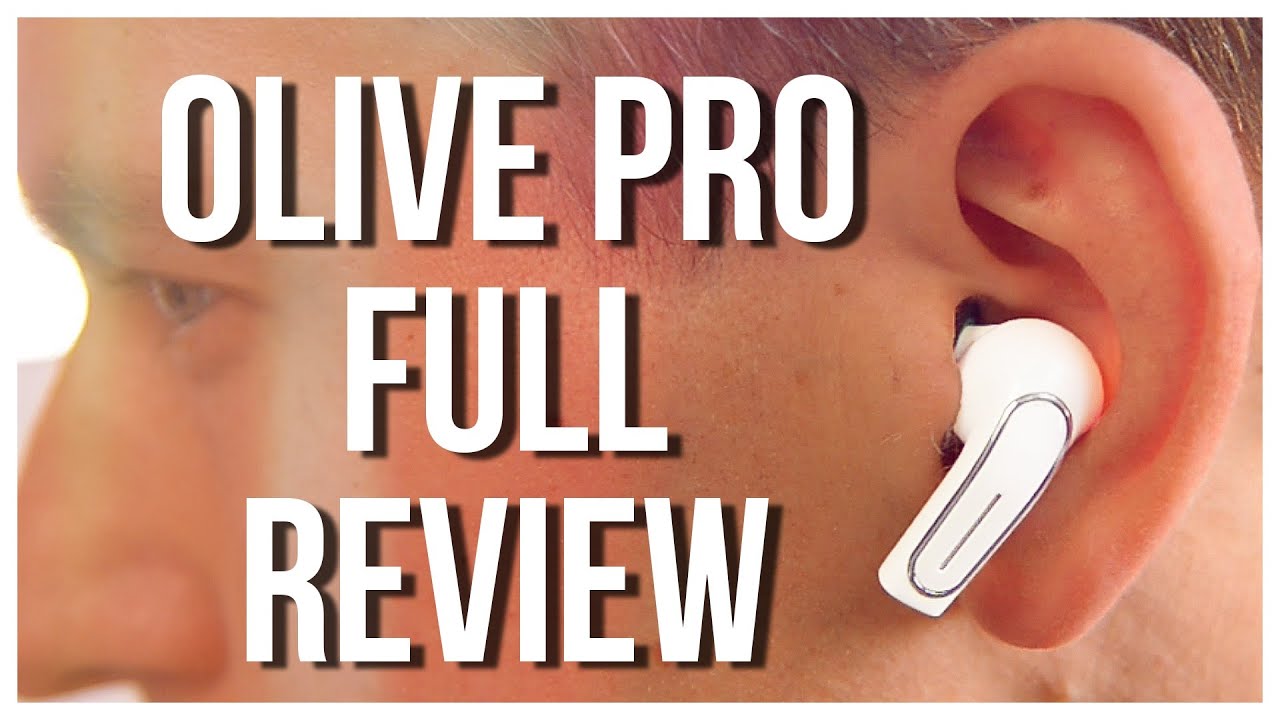 What’s in the box?

Inside the box, you'll find:

The medium-sized tips are already attached to the earbuds. 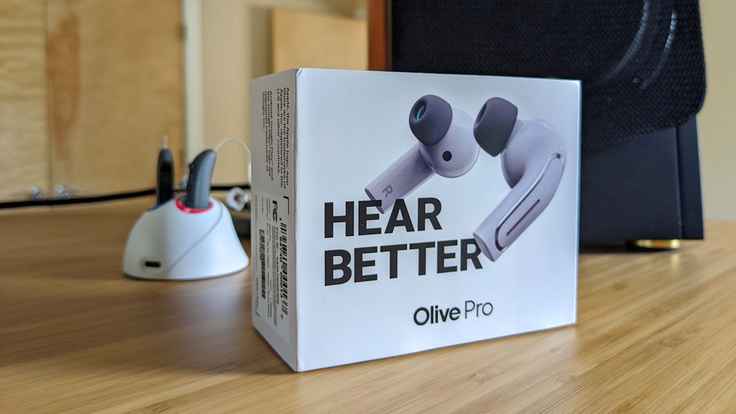 What style of hearing device is the Olive Pro?

Olive has abandoned the in-ear earbud design of headphones that they had with their first model in favor of a classic earphone style, in which the stem of the headphones rests against the ear lobe.

The benefits of this type include better awareness of environmental sounds, so you hear more ambient noise around you, and they're a little more comfortable for extended use because they don't completely seal your ears.

On paper, this style enables you to achieve a wider soundstage because they sit slightly further away from your eardrum. Additionally, you're less likely to experience occlusion.

The 'Go Faster' stripes down the side give them a distinct look, and the microphones are protected by a sleek, gleaming, metallic grill that catches the light well.

How do they feel when worn?

The Olive Pros weigh 6.2 grams each and feel light on the ears, and what's great is they don't come loose when working out at the gym.

However, it takes a little work to find the tip size that will work best with your ear. Luckily, removing and replacing the ear tips is a breeze; simply pull them off and press them back on. The Olive Pros are compatible with both iOS and Android devices, and pairing with your smart devices is as simple as it would be with any pair of Bluetooth headphones.

What technical features should I be aware of?

Olive decided to go with the latest Bluetooth 5.1 connection with the Olive Pros. This connection is faster and uses much less energy than previous Bluetooth technologies.

There are also configurable touch controls and enough amplification to support those with mild to moderate hearing loss. The hearing aid frequency spans from 125 Hertz to 10 kilohertz, and the music reproduction frequency range is from 20 Hertz to 20,000 Hertz.

How is the battery life?

The provided carry case has enough power to charge the Olive Pro three times, with each charge providing up to seven hours of battery life. Although convenient, this battery life is low compared to other rechargeable hearing aids on the market, which typically provide roughly 24 hours of battery life per charge. On the outside of the casing is a sleek white LED that indicates how much power is remaining inside the charger.

The company initially wanted to include wireless charging, but the decision was taken to remove it last minute because their wireless charging technology couldn't guarantee consistent results.

After you've fired up the app and had the devices fitted with your preferred earbud tips, the app then begins a hearing test. This helps the Olive Pro configure the gain to best suit your hearing loss.

With this type of earphone, it's critical to have a good seal; otherwise, the basslike response will leak out of the ear, which is likely what happened during my initial hearing test. I decided to try again with a set of tighter domes on the end of the device. I even jumped into a professional, soundproof room to conduct the test!

Again, the results seemed inaccurate - under the improved testing conditions, the Olive Pro app claimed I had a hearing loss in the lower frequencies. This means the Olive Pros would then boost those low-frequency sounds even more than I need to, thereby increasing the background noise to unacceptable levels.

Features of the Olive Pro App

Once you take the hearing test mentioned earlier, you can then delve further into the app, which includes the following features:

This feature employs presets in an attempt to improve your hearing in specific environments. They include:

Adjust volume: You can adjust the volume control in the app using the various sliders, and you can do it independently for each ear.

Adjust EQ: This EQ contains ten bands, allowing you to do some exploring. Not only that but any settings you generate can be saved as various applications.

Customizable tap controls: You can customize both the double-tap and the single tap options with this setting, and you can have it do a variety of things, from toggling presets to activating your voice assistant.

Music EQ: You can also adjust the EQ for music that you stream through the Bluetooth connection. There are some pre-programmed options, or you can use ten different EQ bands to customize it yourself. In my tests, the sound had a good crispness, but the bass was sadly pretty flat. It's less than I'd expect for $300 worth of headphones, even when I changed the EQ to put as much emphasis on the bass as possible.

Tap control: This feature teaches you how to customize and toggle the tap controls.

Hearing health screen: This tracks your exposure to loud sounds both through the headphones and ambient noise and alerts you when it detects that you are entering an area of dangerous noise. 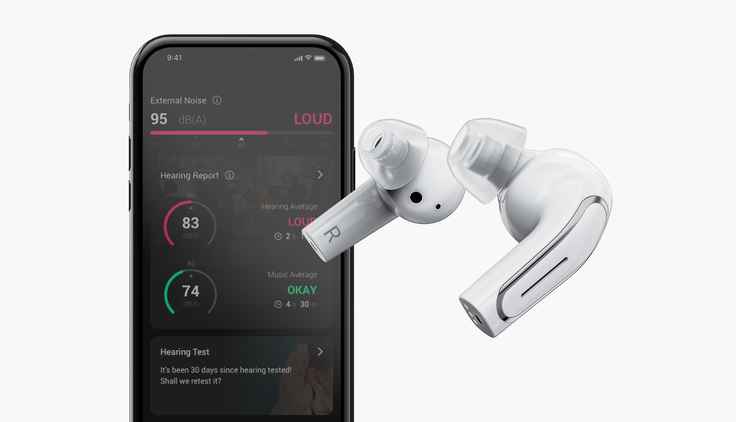 The Olive Pro has a lot going for it. I like that they went for a unique look with the Apple AirPods-style earphones, and I was impressed by the app's feature set and personalization options. I also like that it is a fraction of the cost of a full-fledged hearing aid. This shows Olive is working hard to make hearing devices more accessible to a broader range of people, especially those who would never consider themselves hearing aid wearers.

Still, the earbud design lets the Olive Pro down, and it's an issue you can't 'customize' your way out of. The company has made a valiant effort to try and avoid occlusion by going for the airpod-style of earphones. However, that decision has led to a distinct lack of bass on the output, whether listening to music or using them as hearing enhancers. And it appears that we've gotten the worst of both worlds in that respect because while I didn't have any bass in terms of music reproduction or sound, I was still experiencing occlusion.

The other issue with the airpod-style earbud was the faulty hearing tests, which led to inappropriate hearing fittings and a higher risk of users having a bad experience with these devices.

Olive Union is part of the new wave of hearing aid/audio companies striving to modernize hearing devices for a new generation of people with hearing loss. For that, I applaud them, but the Olive Pro shows that they still have some way to go before really meeting the needs of its users. I like the Olive Union ethos, but hopefully the company will listen to user feedback and come back with a better device next time. 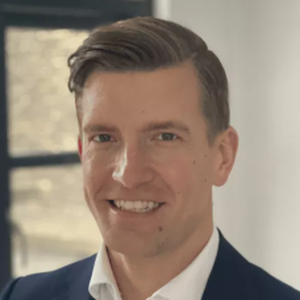 Matthew Allsop is the Video Content Manager at HearingTracker.  He has over 12 years’ experience in audiology, and has practiced in both the NHS and the private sector. He is accepting new patients at Harley Street Hearing in London.