When Your Husband Won’t Get Hearing Aids

There were plenty of signs my husband, now age 48, had hearing issues. When I got in a car after he had driven it, the stereo would come on at a volume so overwhelming, it was almost an assault. And if we went to a restaurant with a lot of sound-reflective surfaces, it was game over. He'd find a topic to dive into with the person sitting closest to him and then bluff his way through to the end of the night. I'd come away from a fun night feeling engaged and recharged. He came away exhausted.

I noticed this end-of-the-evening discrepancy—but when we'd talk about it, he'd insist it was not a big deal. The truth is, though neither of us realized it then, we had edited out a lot of social activities due to how he might be able to navigate–or not—the noise level.

When he would decline to join me for a cocktail hour (remember those?), he'd say we both knew how much he and our sons craved "men's nights," where they could eat dinner without my "fancy" rules and watch back-to-back episodes of Pawn Stars. He'd happily send me off, acknowledging how little time I had to myself in the first place. We had enough positive spin going to make even the best in the biz feel dizzy.

All in the Family

Thinking back, even when we were at home with our two sons, he'd often ask one or another of us to repeat a comment or a question. Our younger son started referring to a news network Jeff enjoyed watching as, "The Shouting Channel." While the channel boasts some excitable hosts, the extra-loud volume was the real culprit. "Turn down the TV!" the kids would yell, reversing the old joke about parents begging their offspring to turn down that awful music.

Once in a while, our sons would ask him directly to have his hearing checked, but he'd blow it off. I couldn't figure out why a plea from them didn't resonate; it was puzzling, even frustrating. Didn't he want to lead a fuller life? Why did he risk missing out on music and conversations? We're a communicative pair, and he's the kind of partner who listens. But this topic wasn't easy to broach. He—forgive me—didn't want to hear it. It wasn't necessarily his ego talking, but something we refer to in our X-chromosome-heavy household as "classic male obstinate denial."

Whatever, the case, I knew piling on and nagging nonstop wasn't the answer. I framed the situation for him, echoed what he was experiencing. Ultimately, he had to come to the decision on his own. (And he thinks our sons' stubborn streaks come from me!)

The tipping point arrived last year. Sadly, it came in the form of an upsetting evening. At a neighborhood get-together, he realized he simply couldn't hear or function. He admitted that his coping mechanisms had been bested by a noisy room and dove into research on the topic. I supported the process, knowing he was ready to address it, once and for all.

Suddenly, his hearing loss was the only topic. We unraveled the issue together. "The number of situations I have opted out, because I knew I would not be able to hear!" he said, and, "I realize you've been translating for me a lot in noisier rooms."

Soon we found ourselves at an audiologist's office. I'd insisted on coming along to the appointment. It wasn't that I wanted vindication (fine, maybe a little), but I did want him to understand he wasn't alone in this. The kids and I hadn't been bugging him to make him feel badly: We were worried.

The audiologist asked: "How long do you think you've been experiencing hearing loss?"Jeff's answer was quick: "Oh, a year, maybe two." He glanced over at me, and I held up a hand with all five fingers extended on both hands.

"What? Really?" asked Jeff. As surprised as he was by my answer, the audiologist assured us this sort of discrepancy was common. Partners notice the loss early on, but the patient can take some time to come around.

But come around he did. The minute he slipped on his new hearing aids—with a cool titanium-gray casing that pops next to his silvery hair—the world opened up again. Parties? No problem. Noisy restaurant? Bring it.

Still, I was surprised one cold December evening, when we were outside, watching our son's ski team from the base of the training hill.

He commented to a friend about a song playing over the loudspeakers. "You heard that? And you could hear well enough to engage in a conversation about it?!" I asked him a little later. He broke out in a grin. "Yes. Can you believe it?" We were standing—I kid you not—less than 100 feet from an incredibly noisy snowmaking machine.

"I did," he said, beaming. "Bionic ears are the best." It took patience to get there, but it was definitely worth the wait. 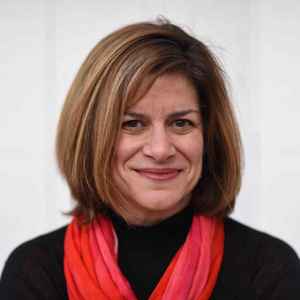 Bari Nan Rothchild is a writer and editor whose work has appeared in Self, Good Housekeeping, Real Simple, and The New York Times.