Did you know that 50% of all home fire deaths occur while we’re sleeping, during the hours of 11PM to 7AM? There are over 44 million adults with hearing loss living in the US, and they are particularly vulnerable to missing the audible alerts produced by traditional smoke and carbon monoxide (CO) detectors, especially while they are asleep.

Fortunately, there is assistive technology designed specifically for those who are Deaf or hard of hearing (HoH). Special smoke and CO detectors are available that produce tactile or visual alerts, to help provide more robust alerting at all hours in case of an emergency.

In the USA alone, an average of 353,100 house fires occur each year. The amount of property damage from these home fires adds up to being around $7.2 billion dollars. Priceless family heirlooms and luxury goods may be reduced to ashes. The structural foundation of the home can experience significant damage during a house fire making it uninhabitable. Smoke and water from putting out the fire can also be absorbed by the structural support of the home, leaving permanent damage.

Furthermore, house fires may pose an even greater threat to an individual’s wellbeing. Those 353,100 house fires consequently caused an average of 2,620 US civilian deaths - every year! While there is a risk of being severely burned in a house fire, smoke inhalation and increased levels of Carbon Monoxide can be highly toxic leading fatal respiratory issues. More than 80% of deaths caused by house fires are related to smoke inhalation.

Beyond the flames, there can be emotional trauma from enduring the disaster. Experiencing an intense amount of stress which overwhelms coping mechanism can result in PTSD and stress-induced anxiety. Read below to learn more about what preventative measures can be taken to best protect yourself in the event of a house fire.

According the American Red Cross, a person has about two minutes to safely evacuate during a house fire. However, by creating good fire safety habits, you are greatly reducing the risk of a home fire starting. Here are a few preventative measures you can start putting into practice today:

When developing good fire-safety habits, installing the right type of smoke alarm based on your needs is one of the most important first steps. Based on your hearing ability, you may require a solution that is more conspicuous; a solution that can grab your attention urgently without fail. Fire protection solutions designed for people with hearing difficulties often include visual and tactile alerting in conjunction with traditional auditory T3 alerting required by NFPA. Even if you are a hearing aid user, it is worth considering upgrading your fire alarm system to gain a better sense of protection in your home, since most hearing aid users do not wear them to sleep.

Bellman & Symfon’s Smoke and Fire Notification System is a fully interconnected system that works around the clock to protect you in your home. The Smoke Alarm Transmitter is bundled in two packages, “Safe@Day” and “Safe@Night”. The Safe@Day package consists of a Smoke Alarm Transmitter, Bed Shaker, and Flash Receiver while the Safe@Night package includes the Alarm Clock Receiver instead of the Flash Receiver. All components in these packages are a part of the Visit Smart-Home system from Bellman & Symfon. 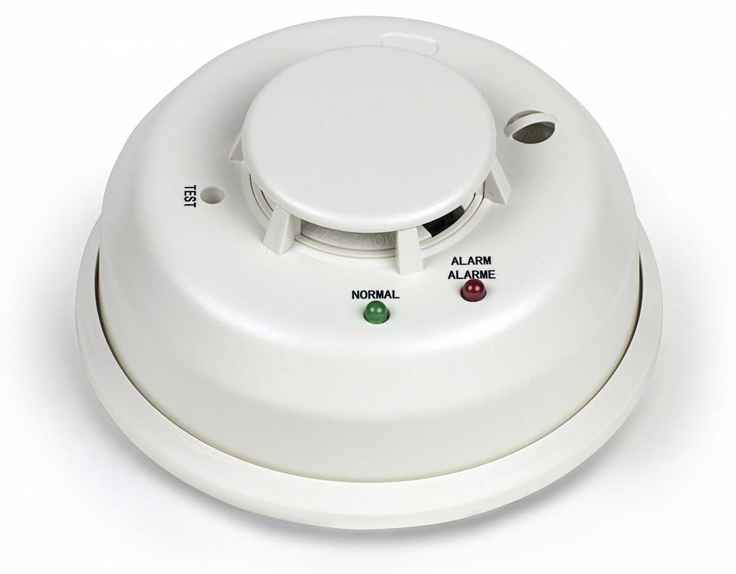 First Alert’s Smoke Alarm with LED Strobe is a single-unit smoke detector implemented with an LED strobe to create a visual notification for people with hearing difficulties. This hardwired smoke detector comes with a 10-year sealed battery and can be interconnected with up to 18 First Alert detectors. The interconnected smoke alarms will emit a T3 frequency sound and flash in unison when triggered. 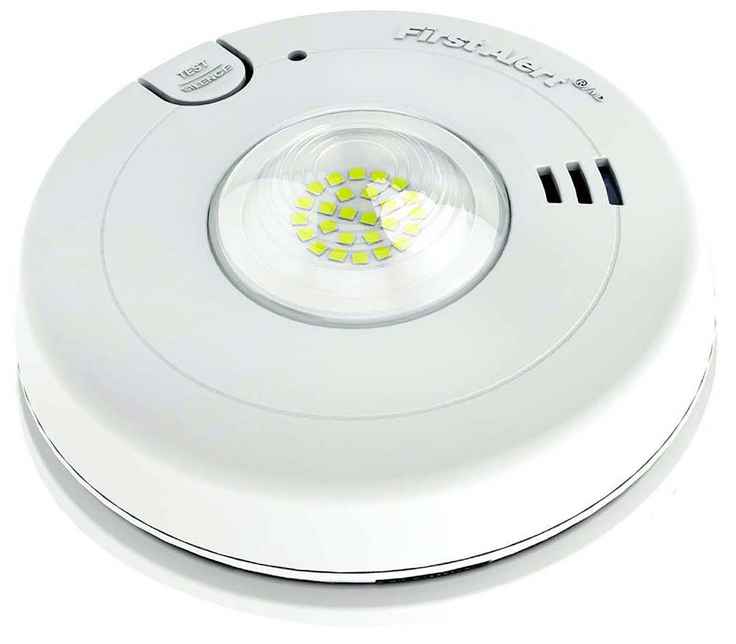 CO Alarms from First Alert are also available and can be compatible with any First Alert smoke detectors by having Smart Strobe which distinguishes the flashes for both fire and CO emergencies. To have the most protection when using First Alert’s Smoke Alarm with LED Strobe, be sure to place one unit in a clearly visible area in your bedroom so that you will be alerted of an oncoming emergency no matter where the fire begins. Each individual unit sold separately.

Lifetone’s Bedside Fire Alarm and Clock is a unique approach to fire safety for people with hearing loss. Instead of sensing smoke at the source, Lifetone devices sense the T3 sound frequency of the existing smoke alarms in your home. Keep in mind that this is NOT a photoelectric smoke detector like the devices described above, but is more or less an extension of alerting for your already-installed smoke alarms. 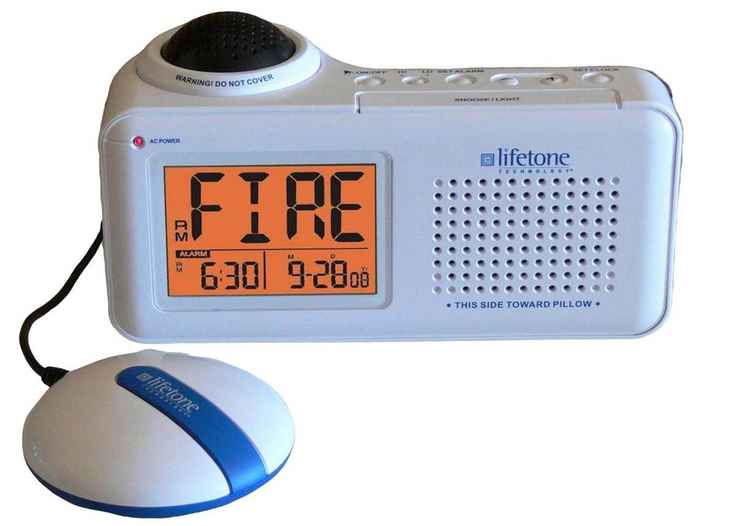 When the Lifetone Fire Alarm and Clock senses a T3 sound frequency, the device will alert by auditory, visual, and tactile notification. The device will emit a normal T3 beeping along with audible instruction to “Get out!” between beeps. The LCD clock screen will light up with a “FIRE” message presented, and the Bed Shaker will send vibrations to create additional visual and tactile alerts. Each Lifetone Bedside Fire Alarm and Clock is sold separately.

All in all, efforts made by fire safety organizations and advancements in assistive technology have greatly reduced the risk of being exposed to the dangers of fire. When considering the right smoke alarm in respect to your hearing ability, it is important to make sure the system is installed properly and that alerting functions are powerful enough to catch your attention, even when sleeping. Contact your local DHHS to find out if there is any ongoing initiatives for hearing impaired smoke alarms. If you have questions or feedback about smoke alarm systems for the hard-of-hearing, feel free to join the discussion, we would love to hear from you! 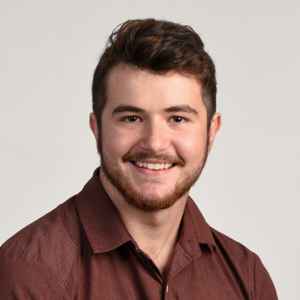