Today’s historic Executive Order established a whole-of-government effort to promote competition in the American economy. The Order includes 72 initiatives by more than a dozen federal agencies to promptly tackle some of the most pressing competition problems across our economy.

In the Order, the President: Directs HHS to consider issuing proposed rules within 120 days for allowing hearing aids to be sold over the counter.

A push to break up anti-competitive markets

The Biden administration argues that "fewer large players have controlled more of the market" in areas like "prescription drugs, hearing aids, and internet service". The administration also predicts that OTC hearing aids will "save Americans with hearing loss thousands of dollars by allowing hearing aids to be sold over the counter at drug stores".

A major driver of the expense is that consumers must get them from a doctor or a specialist, even though experts agree that medical evaluation is not necessary. Rather, this requirement serves only as red tape and a barrier to more companies selling hearing aids. The four largest hearing aid manufacturers now control 84% of the market.

The marketplace for direct-to-consumer (DTC) hearing aids is alive and well. One can go to Google, search for “buy online FDA registered hearing aid”, and see a myriad of options, with and without remote support from a licensed practitioner. In other words, the market is highly unregulated, and access to alternative products without the “red tape” is already possible. In fact, the pandemic ushered in an era of growth for companies like Eargo, a publicly-traded company that sells DTC hearing aids online.

At the same time, the wildly successful Apple AirPods Pro already provide hearing-aid-like features like personalized amplification, background noise reduction, and (coming soon) hyper-directional beamforming microphones. While limited in their amplification capabilities, the AirPods Pro cost $249 or less (when on sale), and the market is predicted to be in the hundreds of millions (units sold).

And Bose recently launched an FDA-approved DTC hearing aid—the Bose SoundControl™—that was approved under a special new product classification for self-fitting hearing aids. Many industry pundits predict that the FDA’s OTC hearing aid rules will be modeled closely after those rules.

Surprisingly, many DTC hearing aids are registered with the FDA under product classifications that are intended for medical-model hearing aids. If the FDA forces DTC sellers to reclassify their products as OTC (once the new class exists) and requires product clearance (510k), this would mean that many of the FDA-registered hearing aids being sold DTC today may be pulled from the market temporarily.

This would ultimately be a good thing for consumers. It would mean that consumers would receive an enhanced level of protection from the FDA, as manufacturers would be required to prove the effectiveness and safety of any devices being sold directly to consumers. Without audiologists vetting the products by fitting them on their patients, the FDA has a higher level of responsibility to vet the products before allowing them to be sold on the open market. (My personal opinion)

Does the announcement change the timeline?

In August 2017, President Trump signed the Over the Counter Hearing Aid Act, which authorized the direct sale of hearing aids without medical referrals or prescriptions. The act gave the FDA until August 18, 2020 to publish regulations for the new product category, but the FDA missed the deadline and has repeatedly delayed meeting to discuss the matter.

The Office of Management and Budget (OMB) recently published its official Spring 2021 Unified Agenda, which included tentative plans for the FDA to address OTC hearing aids in 2021. This isn’t the first time the FDA has planned to work on the rules—this is the fifth time the rulemaking session has been scheduled—but today’s announcement does seem to indicate that there is a higher likelihood of the session actually occurring.

When reached for comment, Kate Carr, Hearing Industries Association (HIA) President, said “once the draft is released, we anticipate a public comment period, followed by further FDA review. It could take up to nine months or more for the final regulation to be released.” She also shared the following graphic, which helps illustrate FDA’s rulemaking timeline: 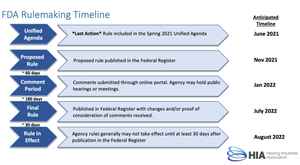 Hearing aid stocks down on the news

The share price for the largest medical-model hearing aid manufacturer on the planet, Sonova, was down sharply (~7%) following the announcement. Other large players were down too: Demant A/S was down ~9%, and GN was down ~6%. Eargo’s stock was also down.

Good Morning America (GMA) covered the new mandate from the Biden Administration this morning. The GMA exclusive asks whether the executive order will provide “new help for millions who need hearing aids”.

For continued coverage of OTC hearing aids, please subscribe to our newsletter. We will continue to follow the story, and will provide updates to our readers.