Google is getting serious about smartphone accessibility for people with hearing loss. Its new Sound Amplifier app enables Android phones to compete with the hearing-enhancement features built into Apple's iPhones. And Google's whiz-bang Live Transcribe voice-to-text translation app (still in beta) aims to attract even die-hard iPhone users to its Android Pixel phone. 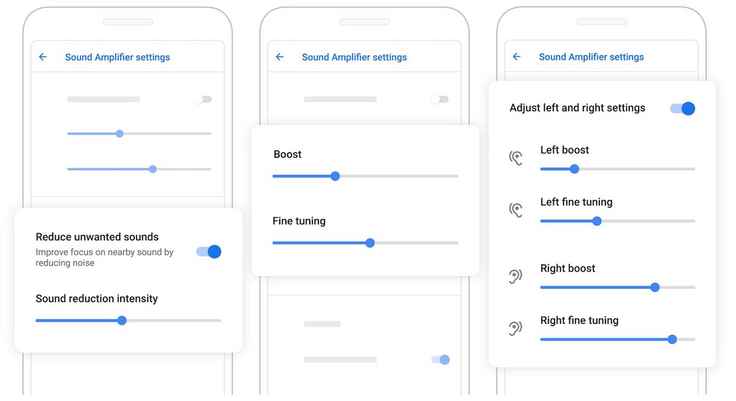 The app is built into new Pixel 3 phones and available in the Google Play Store for any other phone running the new Android 9 Pie operating system.

And for now, it's limited to wired headphones, whereas other hearing-enhancement apps often utilize wireless headphones and ear-buds. In fact, Apple’s Live Listen feature turns an iPhone into a remote microphone that can be used either with its popular AirPods or with Made-for-iPhone hearing aids.

Even so, the Sound Amplifier app gives the Android platform a significant boost in its ongoing competition with the iPhone.

But Google has responded aggressively. Last August, Google announced it was working with Big-Six hearing-aid manufacturer GN Hearing to create a new spec for Audio Streaming for Hearing Aids with Android phones.

GN ReSound was the first to stream wireless audio directly into Made-for-iPhone hearing aids. The “Made-for-Android” announcement from Google signaled their intention to pair hearing aids with the much larger universe of Android phones.

In the meantime, software developers, makers of affordable personal sound amplification products (PSAPs), manufacturers of the upcoming generation of low-cost over-the-counter (OTC) hearing aids, and traditional hearing aid manufacturers have been working on their own new smartphone solutions.

And don't be surprised if Big-Six hearing-aid manufacturer Starkey Hearing Technologies gets into the act as well. Since 2016, Starkey and Bragi have been collaborating on a possible future Bragi over-the-counter hearing aid.

Meanwhile, Google's new Live Transcribe app is currently undergoing beta testing. An "unreleased" version is listed by Google Research on the Google Play Store, and users who want to join the beta test can apply on the Android web site. Or if you have a brand-new Pixel 3 phone, you can activate Live Transcribe in its Accessibility settings.

Live Transcribe promises to provide real-time voice-to-text transcriptions of conversations in up to 70 languages and dialects. It supports external microphones in wired headsets, Bluetooth headsets and USB mics. And it's available on Android 5.0 phones and later.

Member 05 February 2019
Perhaps Google's Pixel 4 will have T-coil capabilities for people wearing so-equipped hearing aids. In the meantime, Bluetooth capabilities allow me to boost the volume at the Pixel, as well as the Bluetooth device. Not as nice as native capability, but it's getting there.

I am not clear as to what these improvements and apps would do for me as a hearing aid user.  I do not understand what "voice to text" could possibly do for me.

I never have understood how streaming sound from a TV direct to hearing  aid does. When I wear hearing aids, the aids process the TV sound does the way it does when somebody is speaking.

I have the first generation Phonak aids w. BTooth built in.  The phone sound is excellent.  There are some serious software issues.

I have phonak hearing aids also. I got the compilot for tv because so many shows now put background music throughout shows that make it difficult to hear the voices well. Especially if they speak softly or if the tone of voice is hard for you. It has greatly enhanced my a ability to enjoy tv.

If the transcription service can transcribe videos like YouTube it would be awesome!!! They can be very hard to hear.

Member 06 February 2019
Generally speaking, you can buy a separate device that is connected to your television. The device may require you to wear an additional receiver that hangs around your neck. The TV device streams the sound to the unit around your neck, which in turn send the sound to your hearing aids. So, in addition to the ridiculously high price of the hearing aids themselves, you have the privilege of purchasing an additional two devices at around $250.00 each. The hearing aids I recently purchased stream wirelessly to my iPhone from the hearing aids. I can control the volume and other built-in features more easily than fiddling with buttons on the hearing aids. The programs for the iPhone are free on Apple Store. What I get from this article is that the Android phone does the same thing. Whoop-de-doo! I'll just add to the huge expense of being hard of hearing and trash the iPhone for an android phone???? Don't get me wrong, but Samsung and the other Android phone manufacturers have been asleep at the switch for several years. That is why I bought the iPhone to begin with.

Ken M 19 March 2019
Interested. I would like to know of any apps that would help my Oticon Agil with better performance with my iPhone 6 S.

Member 19 March 2019
Voice to text allows you to understand what is being said. Sometimes it is difficult to hear well because the volume of the person speaking is too low, or they are using a headset that distorts their speech. I find this frequently with customer service people. The "Caption Call" land line phone (which is provided free to qualified persons) does the same thing. While you are listening on the phone, text is displayed that shows what the speaker is saying.

For TV, using a device that streams to your hearing aids, the sound quality is much clearer.

I'm not sure if your aids are equipped to use any of the iPhone apps, which are manufacturer specific. You can talk to someone in customer at Phonak or to your audiologist about it.

Monica S 06 February 2019
I am 76 and use phonak hearing aids, an additional round the neck compilot allows me to receive voice calls on my LG7 thinq as it did on my previous LG.  If you insist on buying Apple quit *** on the price.  The hearing aid manufacturing companies control costs of hearing aids etc., just as eyewear was controlled .  With a bit of luck some changes are coming in 2020. Hearing loss is much more complicated than vision so it will be some time before you can pick up a pair of hearing aid based on numbers on the packages.  Hearing aid companies chose Apple originally then figured more of the world uses Android. It would be great if it were possible to find better ways to hear TV .  Hearing from my LG7 through my Phonak and Compilot is the best hearing I have had in the 40 years of my deteriorating hearing. thank you David for your information and recognising a huge problem.

I have had NHS hearing aids for a while and recently got private hearing aids and was looking forward to using the blue tooth to stream calls and music form my oneplus 6T to find I can only get an app that will control not stream.

I have been looking into this and its good to hear google are working on direct streaming with android devices to hearing aids.

If this is going to be exclusive to pixel I would happily switch to a google device.

Does any have any update on this?