What motivated us to build Oto—the new app for tinnitus that combines CBT, mindfulness therapy, and relaxation therapy.
By Edmund Farrar

Last year, I was sitting in a London pub with my friend—and fellow doctor—George Leidig. We were going over some interesting patient cases from the previous week. George told me about a man in his early thirties who had recently been diagnosed with tinnitus, which was preventing him from sleeping. This had reminded George of the early experience he’d had with his tinnitus when first diagnosed in 2013.

George and I learned a little about tinnitus at medical school, but mostly in the context of underlying ear-related medical conditions. Neither of us had ever considered the extent of the problem (over 10% of the UK population have tinnitus) or the huge impact tinnitus can have on people’s lives. We knew there wasn’t cure but assumed effective treatment would have been more readily available.

Over the following weeks, we spent some time researching the issue. I reached out to the UK charity RNID, who helped arrange some meetings with people with tinnitus. I had never realised the extent of the isolation that this condition can cause, and I was shocked. One thing that I found particularly frustrating was that invisible conditions (such as hearing loss and tinnitus) just don’t seem to be taken as seriously.

It was when we started to research the available treatment options that we realised we had an opportunity to improve the current offering for tinnitus management. The support available for tinnitus treatment has not kept up with recent advances in technology. For other conditions (such as diabetes or cancer), now more than ever, people are able to access help and support at a time that suits them, using only their smartphone. We felt that people with tinnitus deserved better, and thus Oto was born.

The current solution for tinnitus

In my previous article, I described a common scenario for the treatment journey in tinnitus. Let’s take it one step further – what happens next? You’ve had some treatment with a therapist and now you’ve found some other treatments that show promise. You feel more confident that you can start to manage your tinnitus but only with some more help.

As I outlined in my previous article, there are in fact 3 treatments that the science suggests are the most effective:

Despite recent innovations in tinnitus self-treatment, there is currently no app that delivers all three of these treatments to tinnitus sufferers at the same time. And many apps aren’t custom-tailored to help manage tinnitus. Long periods of silence in mindfulness apps make them difficult for those with tinnitus, and meditation exercises are more effective when they are made with tinnitus in mind.

Recent advances in technology have allowed for improved access to treatment and better understanding of health conditions for patients. Wearable tech has allowed for a far better insight into our own health and the impact that we can have on it (think Apple HealthKit). Significant progress has been made in consumer artificial intelligence technology. Over the last decade, we’ve seen an influx of AI and ML in everything from mobile phones to computing and home devices such as Amazon Alexa.

Right from the outset, George and I aimed to harness the power of this technology to create a product that could be used by people with tinnitus to help better manage their conditions. We knew that we’d need a lot of help, so began to assemble a team of ENT specialists, hearing therapists, audiologists and researchers. We now have a huge amount of collective experience in helping those with tinnitus, and we’re condensing this experience into creating what we hope will be a revolutionary product.

Oto is a mobile app that allows instant access to science-based tinnitus therapy. It will be available on iPhone and Android and is currently in the early phases of development. The first problem we want to tackle is availability of treatment and information for people with tinnitus. Oto provides tinnitus therapy in the form of a progressive programme of CBT, mindfulness, and education. We want to equip people with the skills needed to take complete control of their condition.

How will it work?

You’ll work your way through a series of progressive modules that incorporate evidence-based therapies for tinnitus – the core of which will be CBT, mindfulness and relaxation. Each day, you’ll be prompted to complete a short therapy session. The exercises will gradually grow in complexity as you develop and start to incorporate them into daily life. Oto will monitor your improvement and make suggestions to improve the way you cope with your tinnitus as a whole.

We want for Oto to be the only app you’ll need to manage your tinnitus. For that reason, we’re building a library of curated sounds and masks to help you relax and sleep. This can also be used in conjunction with the therapy – so there are no uncomfortable silences for you.

In summary—here’s what we hope Oto will improve for people with tinnitus.

Oto will allow anyone to access tinnitus therapy that works, from the comfort of their own home, for a fraction of the cost of private therapy. No more long waiting lists, no more driving to appointments.

When will Oto be released?

The public beta is going to be released in August. This will include the introductory tinnitus module. We’re looking for pre-release testers to provide early feedback on the beta version, and we’d love to hear your thoughts.

UPDATE: The Oto app was released in December 2020 and is now available to download on Android and iOS. You can download the app now. 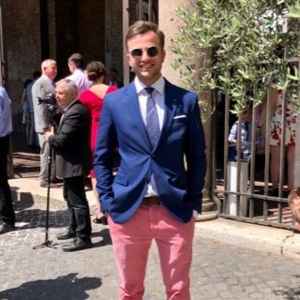 Edmund Farrar is a medical doctor and the co-founder of Oto Health, a UK based startup that is improving access to therapy for people with tinnitus or hearing loss using a simple mobile app, Oto. Built in collaboration with ENT surgeons and hearing therapists, Oto combines AI-powered hearing health tracking with tinnitus therapy and personalised hearing training.