The first time Richard Brown helped fit patients with hearing aids on a Starkey Hearing Foundation mission, he knew there would be no turning back. "It was the look on their faces when, for the first time, they heard sounds that everyone else takes for granted," says Brown, now the President and Board Chair of the foundation. "There's no better feeling in the world." 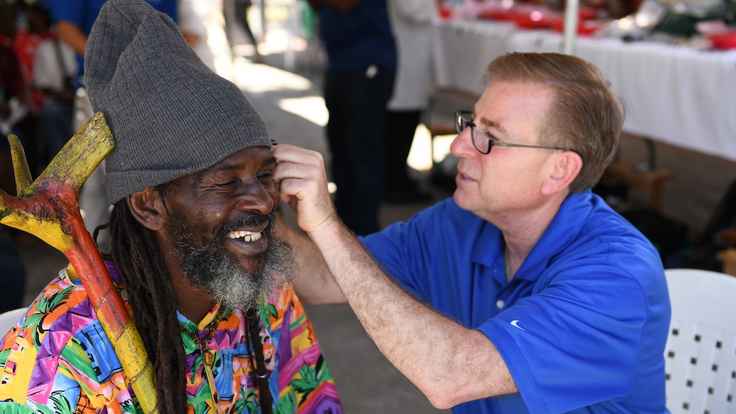 Richard Brown, President and Board Chair of the Starkey Hearing Foundation, is implementing a long-term strategy to help developing nations establish their own national hearing healthcare programs.

Brown met Starkey Hearing Technologies’ founder William Austin at a Jefferson Awards ceremony in Minnesota where both were being honored for their community service. He knew of Austin's lifelong philanthropic endeavor to provide thousands of people in developing countries with free hearing aids. And like many other residents of the Twin Cities, Brown was regularly exposed to news coverage highlighting Starkey Hearing Foundation’s celebrity-infused mission trips and fundraiser gala events.

But it wasn't until Brown accepted an invitation to accompany Austin on a whirlwind three-country tour that he understood the scale of Starkey Hearing Foundation's vision and ambition. "I just could not believe everything they were doing," Brown says.

On that trip, he learned that the foundation's past success in providing free hearing healthcare services to more than a million patients in more than 100 countries was only a start. Bill Austin and his wife Tani, Chief Philanthropy Officer of Starkey Hearing Technologies, had bigger plans. True success would be measured by their ability to help establish a global public hearing-health infrastructure capable of serving entire underserved populations for decades to come. 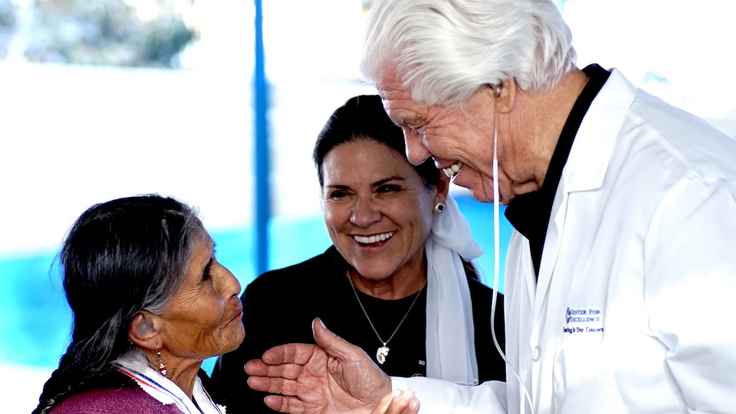 Tani Austin, Chief Philanthropy Officer of Starkey Hearing Technologies, and Starkey Founder William Austin together envision a world where hundreds of millions of people currently without access to hearing healthcare services are able to get the help they need.

It didn't take long to persuade Brown, owner of a successful Minneapolis financial advisory firm, to join the foundation and come up with a plan to fulfill the Austin’s vision. Now, six years later, he devotes nearly half his time to the organization.

"When we first visited Zambia, there was only one audiologist in a country that had 750,000 people in need of hearing healthcare," Brown says. "We hired him, purchased property, opened a school, and created a nine-month program to certify hearing healthcare specialists."

The Starkey Hearing Institute in Lusaka, Zambia, led by Executive Director Dr. Alfred Mwamba, has graduated 30 hearing healthcare specialists from 15 African nations over the past three years. Graduates from the Institute return to their home countries to start the long process of establishing hearing healthcare services where none existed before.

On a continent where the invisible disability of hearing loss is often unacknowledged and completely untreated, it may appear to be a small start. But it could also be the start of something big. "It's amazing how just a little bit of help can change so many people's lives," Brown says.

The World Health Organization says 466 million people have disabling hearing loss worldwide, with the greatest prevalence in developing countries. And less than three percent of that population have access to hearing healthcare and can afford a hearing aid.

In many remote locations, people with hearing loss are still segregated and stigmatized as "deaf and dumb," Brown says. But when a young person fitted with hearing aids returns to school as a mainstream student, those old stereotypes quickly vanish.

"A lot of people don't need that much amplification," Brown says. And a good pair of hearing aids can make all the difference. "There are so many children you may have the opportunity to mainstream."

To fit patients with hearing aids quickly and cost-effectively, the foundation created what it calls the Wide Frequency Audibility (WFA®) fitting method. It's less expensive and less time-consuming than a traditional hearing aid fitting, and the end result is life-altering hearing improvements for thousands of hearing aid recipients.

The hearing-aid-fitter interacts with the patient to ensure a comfortable fit and adequate amplification. When two hearing aids are fit, the fitter checks the balance of the devices, to increase the chances that the recipient hears well in noise and is able to localize sounds. Finally, the fitter locks-in the hearing aid settings and provides basic training on how to use the hearing aids.

Identifying patients who need hearing assistance and fitting them with hearing aids are only the first two steps in the four-step Community-Based Hearing Healthcare Model. The next two steps—effective aftercare and mainstreaming skills development—are equally important. Volunteers train to provide aftercare to help patients get used to their hearing aids. In 2018, volunteers and specialists conducted more than 200,000 aftercare sessions.

Once foundation specialists are trained, they recruit volunteers in their communities to participate in the third step of the program—aftercare for patients in the weeks and months after they receive their hearing aids. Teachers, relatives, clergy, and healthcare workers in clinics are all capable of learning of potential issues, calling on the foundation for follow-up assistance, and providing other ongoing support as patients come up the learning curve. In 2018, the foundation conducted more than 200,000 aftercare sessions worldwide, Brown says.

With the fourth step in its model, the foundation supplements aftercare with mainstreaming training in assimilation, listening, speech, and language acquisition. As part of this initiative, the foundation has enlisted 15 academic partners around the world to share and disseminate best practices of the community-based hearing healthcare model.

Given the enormity of the global challenge, thirty hearing-health graduates from 15 different countries attempting to effect change in multiple countries across the African continent may seem like a small drop in the bucket. But that's where the next phase of the foundation's program kicks in.

By proving success on a small scale, Brown and the foundation's leaders are able to encourage major infrastructure changes on a national and regional scale. In 2016, they developed a template for the cost-effective integration of hearing health services into national health plans, launching a pilot program in Kenya and initiating programs with five other African countries.

"We provide a clear blueprint to guide the activities of the national health services," Brown says. The blueprint includes a three-year plan that offers extensive partnering with the foundation for training and delivery of services, with a progression to full self-sufficiency within five years. In addition to work with national governments, the foundation reaches out to non-governmental organizations (NGO's) capable of supplementing national programs.

Today, Kenya, Ghana, Nigeria, The Gambia, Tanzania, and Rwanda are in various stages of implementing the Community-Based Hearing Healthcare Model. And the foundation is adding six additional countries, including a planned expansion to Latin America, in the coming year.

Master of the media

Of course, supporting a global philanthropy program is expensive. How has the Starkey Hearing Foundation sustained its operations since its founding in 1984?

Starkey Hearing Technologies is a privately held company that has made Bill Austin, the founder and principal owner, a billionaire. And Austin has always made the foundation a top priority.

Throughout his career, Austin has also proved himself a master of attracting media attention. Among other things, he personally fit four presidents, two popes and Mother Teresa with hearing aids—and the media always knew about it. So the foundation has been a magnet for deep-pocketed philanthropists and corporate donors. Its annual fundraising gala is a who's-who of celebrities from Hollywood, professional sports, and the political establishment. 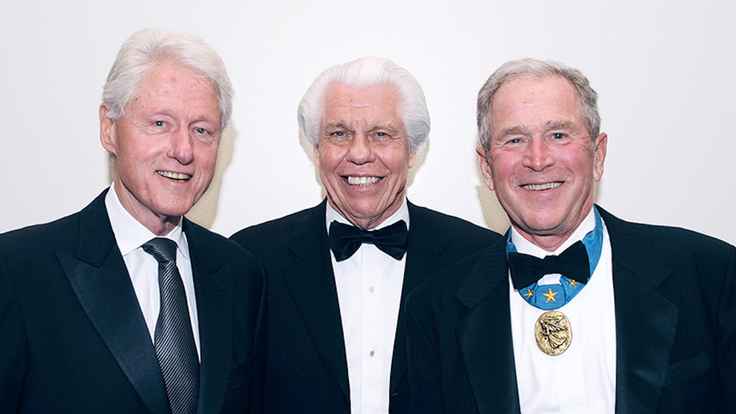 Since turning day-to-day management of Starkey Hearing Technologies over to his stepson, Brandon Sawalich, two years ago, Austin has been able to continue devoting the lion's share of his time to spreading the word and extending the reach of his foundation. Meanwhile, if there's any doubt about the future of the Starkey Hearing Foundation, Sawalich is quick to make it clear he's got the same level of commitment.

A tech-savvy forty-something executive who recruited a top manager from Intel to serve as Starkey's new Chief Technology Officer, Sawalich is a regular on social media. This past March he saw a LinkedIn post about a child in Nigeria who was in desperate need of hearing aids; her mother reported that she was three and a half years old, and still wasn’t speaking. Sawalich immediately made a call to Brown, who had the foundation reach out to the little girl’s mother to schedule a hearing aid fitting. 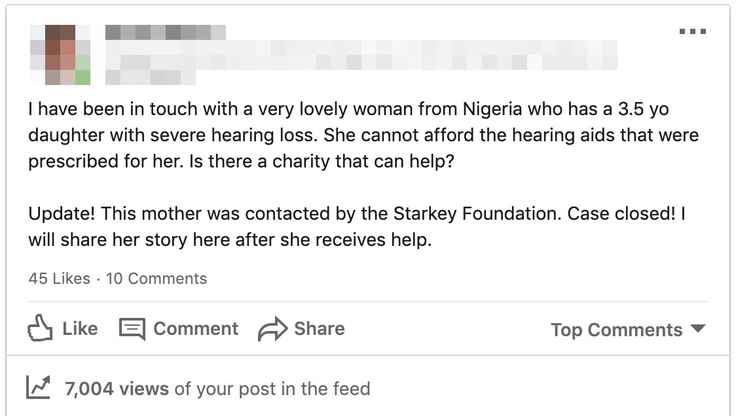 The LinkedIn post that rescued a little girl from a world of silence.

Within two weeks, her appointment for a fitting on the next Starkey Hearing Foundation mission was set, and Brown had recruited the child's mother to volunteer for the foundation's aftercare program.

"That's how to make it sustainable," Brown says. "One patient at a time."